Anoint Me With This.

I texted my friend, Angie, and asked her this:

“What can you tell me about Babylon and the Babylonians? Just the crib notes please.”

Angie is my dear friend from high school who has been married to a pastor for the past 20 years. She looks like a cherub; porcelain skin, smiling eyes, and golden ringlets framing her face. This seems fitting since she knows all things GOD.

“They tried to build a tower to reach Heaven after God told them not to,” she said.

“He told them to spread out and multiply throughout the earth. So, when they disobeyed, God gave them different languages and they could no longer understand each other.”

I feel this way about my daughter who speaks Teenager. I don't understand her at all.

“Then the people grouped together according to language and type and spread out into different areas,” Angie said.

I don’t know the origins of Teenager. I don’t think it’s Romantic, more like reverse Pig Latin where the consonants and endings of words are silent.

That’s a bunch of babble right there and we live in the same house.

I had a voice teacher once who was hard to understand. I swear she was from a different country, but I couldn't place it. She spoke with impeccable diction, and spoke only in her head voice, a kind of high-pitched tone that gave her an English, Mrs. Doubtfire type of vibe. Only she wasn't british, or fake british even, like Madonna. (The pop star, Not the mother of God.) My teacher was born on a farm about 20 miles from where I live, but if I didn't know better, I would swear she reigned from the Land of Neurotic Voice Teachers.

Back to the Land of Babylonia, I thanked Angie for her biblical prowess and sprang this one on her,

“Well, did you know that the Babylonians were the first to make salad dressing?”

“You mean the New Babylonians?” she said.

“New Babylonians? What?” I said.

“Well, the New Babylonians became a people in 18th century BC. They may have a record of salad dressing from then, but definitely not the Old Testament Tower of Babble Babs,” she said.

Now, I’m confused and don’t want to spend any more time researching who was the first to dress their greens, but I think it’s a huge contribution to mankind.

Somewhere in the Bible, they deserve an honorable mention or a footnote, or something. Like on the 8th day God made vinegar and oil and presto…vinaigrette.

I think the first ruler of Babylon was named Nimrod, so maybe he wasn’t smart enough to come up with a recipe for salad dressing.

Even still, I don’t think the Babylonians should have been punished for building a tower to heaven. Maybe they just wanted to offer their vinaigrette up to God.

At any rate, long before Jesus turned water into wine, some Babylonian somewhere turned wine into vinegar.

And you can anoint me every day with a little olive oil and vinegar and salt and pepper, too.

Praise be to God. Hallelujah. Amen. 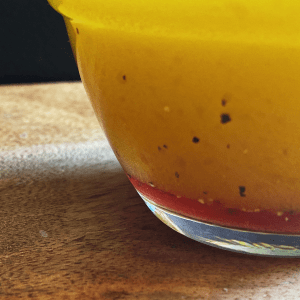 I think most nationalities have a basic vinaigrette recipe. In our family, my gram dressed the salad to order - just olive oil, red wine vinegar, salt, and pepper. She didn’t whisk it in a bowl, just drizzled unmeasured amounts over the greens and mixed it with her hands. This version has a mix of kinds of vinegar and the addition of lemon juice and honey. The rule here is 3 parts oil to 1 part vinegar. Beyond that, you can do whatever you like. If you like more lemon juice and less red wine vinegar, you can make that adjustment just as long as you follow the 3 to 1 rule. Like it sweeter? Add more honey. Some people prefer sugar. It’s your choice. I make this dressing at home every night. It’s pretty basic, but you could add some minced basil or parsley, or some fresh, minced garlic. That would be nice. A cup of dressing could dress a pretty big salad, so find a container for your dressing and put a lid on it. It will be good tomorrow, and the next day and the next…
Print Recipe Pin Recipe
Prep Time 5 mins
Course Salad
Cuisine American, Italian, Mediterranean