"Leave the gun. Take the cannoli."

I take my ticket from the red ticket dispenser and look around.

It's bright and white inside the bakery and smells of citrus and sugar. There are fake wedding cakes on display and some birthday cakes, too, and a few café tables. There are shelves of homemade torrone and containers of candied fruits. Glass display cases flank each wall.

I raise my hand showing my ticket.

"What can I get you, hon?" The woman behind the counter asks me.
She smiles in a way that says, "You're familiar to me." So familiar that she moves towards the pastry I want before I ask.

I've been to Moio's many times before. Everyone is friendly and I like being there. Maybe she remembers me.

"I'll take two pasticiott, a Napoleon, a slice of rum cake, and a half and half cannoli, please."

I pronounce the word "pasticiotti," "pasticiott," cutting off the end like my grandparents did.

She grabs a white cardboard box and begins to fill it with Italian goodies; first the Napoleon and rum cake, and then the pasticiotti. She walks to the other end of the counter and grabs a crispy cannoli shell from a bin of crispy cannoli shells. She pipes one side with regular sweetened ricotta and the other side with chocolate ricotta.

The lady behind the counter closes the box. She slides the box under a machine that mechanically ties it with twine.

"You goin' right home? It's hot out there and these need to be refrigerated right away."

"I'm taking them to my piano teacher, Frank,” I say. "He lives a little far from here but it's on my way. He used to buy pastry all the time when your shop was on the avenue."

I tell the lady behind the counter about Frank - on purpose. I'm not sure why. Maybe it's because I think everyone should know about Frank, or because my family, like so many Italians around here, started their American lives on the avenue. Maybe I wanted her to know we shared that history.

"Ah, I bet he knew my dad then," she says and gestures to the painting on the wall. Behind her hangs a large portrait of a man, with tan skin, dark hair, mustache, and wearing a chef's coat.

But I already knew that.

She hands me the box. I slip my finger under the twine and proudly walk out.

Frank and I sit down at his kitchen table. He opens the box and goes for the cannoli first. He takes a bite and grins with approval.

"My life changed when I went to Larimer Avenue," Frank says.

Frank lived on Lincoln Avenue, a few blocks away. He lived with his sisters, his immigrant parents and grandfather, the train tracks in his backyard.

"When I was a little boy, my dad would take me to Moios after church. He didn't like me being around, we never got along, but on account of my mom, he took me with him. He always bought me a cookie or something. I didn't know about the good stuff until I started playing in clubs as a teenager."

Frank's a legendary jazz pianist and has been playing professionally for nearly seven decades. He went to Westinghouse High School where other famous jazz pianist honed their chops: Ahmad Jamal, Billy Strayhorn, Erroll Garner, Dakota Staton, and others.

Still in school, Frank played at Genovese Cocktail Lounge from 9-2 am, six nights a week. The club owner, Bill Genovese, was a big-time Mafioso and took a liking to Frank. Each week, Bill gave Frank a bottle of whiskey and a bottle of ginger ale.

"I'm gonna call you kitten because you are too young to be a cat," Bill said.

Frank doesn't drink. He'd give the whiskey to his bandmates opting for a sweeter, cream-filled vice.

"I would have a good Italian meal at the Meadow Grill and then walk next store to Moio's to get some cannoli before my gig," Frank says.

"Oh, and the girls. The girls would come from everywhere to meet up with us Italian boys, especially the Polish girls. They loved us."

Larimer Avenue was once an Italian community filled with shops, delis, restaurants, churches, and a ton of places to hear live music. Frank said he played in forty-eight clubs in East Liberty alone.

When I go to my piano lesson, I often bring Frank dinner, a good Italian meal, and he often has wine and my favorite cookies waiting for me.

Frank’s kitchen is lit like a nightclub. We eat and talk and drink coffee. Frank shares bygone stories of big bands, women, and gangster-run cabarets, and I share cannoli.

This week I try my hand at making cannoli, homemade. I watch as Frank picks up the cannoli and takes his first bite. I want it to taste as good as when he took his first bite all those years ago. And then Frank gives me the best compliment ever."

Frank's reaction to my homemade cannoli:

A big thanks to Nate Mallick, a fellow cook, for helping me perfect this recipe. He makes exquisite pasty and cannoli. Thanks Nate! 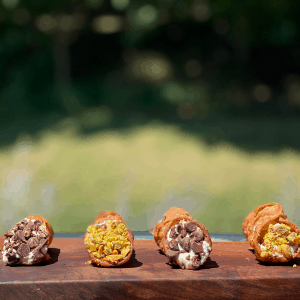 "Leave the gun. Take the Cannoli." This homemade cannoli recipe will have you leaving everything behind for a bite of this sweet ricotta filling and light crispy shell.
Print Recipe Pin Recipe
Course Dessert
Cuisine Italian

To Make the Cannoli Shells

To Make the Filling

Make sure to buy the cannoli tubes that have a seam. This allows you to squeeze the tube together and release the shell easily. I found that removing the shell while still hot worked best. To do this, Using a clean towel, I held the cannoli shell and mold and gently squeezed the mold together. With my other hand, I used the tongs to twist and pull the mold out of the shell. Using metal tongs, carefully lower the dough into the oil and fry until golden brown (about a minute or two), in the oil. To make sure the oil is at the right temperature, drop a scrap of dough of the same thickness in the oil. Observe how it fries and adjust the heat if needed. Use a thermometer to make sure the oil stays around 350 -380 degrees F.s F.e top, and gently press down to seal. Place the wrapped cannoli shells in the refrigerator as you work. Only pipe your filling as your ready to serve. Otherwise, the shells won't keep their crunch. You can store the shells in an airtight container and store the ricotta mixture in the fridge. When you're in the mood for a cannoli, just pipe them as you eat them.
« Better Than Apple Pie Cookie Recipe