I love Ryan's enthusiasm for food and for his willingness to try all types of adventurous recipes and cooking methods like making his own hot sauce, fermenting everything, and smoking meats, even crab legs. He's currently into making aebleskivers - Danish pancake balls. Who knew?

I love his fervor for food and share his perspective on cooking: "Food is love," Ryan says. I believe that, too.

I asked Ryan to go easy on us and give us an attainable dish that doesn't skimp on presentation or flavor and he didn't disappoint.

Ryan loves this dish because he opens his fridge and sees what he has. Quiches are great for that. You can change the meats, the cheeses, the veggies...whatever you like.

My favorite part of this recipe is the shredded potato crust. It adds great texture and crunch.

I added the Lime-Cilantro Crema because 8 eggs, ½ cup of cream, and some butter just wasn't enough dairy. Just kidding. I like the coolness and tang it adds, but it tastes amazing either way. 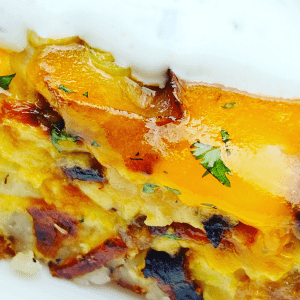 Sausage and Mushroom Quiche with Potato Crust and Lime-Cilantro Crema

Potatoes, eggs, and sausage? A complete, one-pan breakfast, and a great way to feed a crowd. Make this quiche your own. Switch out the sausage for crispy bacon or ham and add any veggies you like.
Print Recipe Pin Recipe
Prep Time 55 mins
Cook Time 20 mins
Course Breakfast
Cuisine American, Mexican

To Make the Quiche

To Make the Lime-Cilantro Crema

Meet Ryan: After our first child was born, and we no longer had the luxury of going out to eat at all the great restaurants, I decided it was time to learn how to cook for the family. I started by trying to master the basics. I’d cook the same recipes over and over until I was consistent then I’d try to learn more complicated recipes. I figured, if you cooked with fresh ingredients and made them properly, even basic meals are tastier, healthier, and less expensive than going out to eat. As I got more confident and learned more cooking styles, I started this journey of chasing flavors and haven’t stopped.

Addicted to BBQ and ethnic foods, I’m always planning the next meal, watching YouTube recipes, and searching for those great local markets with the best ingredients. Food is love and you only get back what you put into it. Stay safe and eat well.

« Best Chocolate Cake Ever. For Real. I mean it.
Sweet and Spicy Party Balls »