Need a tasty appetizer for game day or even a wedding? How about some stuffed hot banana peppers bites? These hors d'oeuvres are so cute and delicious and check all the boxes. Stuffed hot banana pepper bites are basically bruschetta made with toasted bread, spicy sausage, gooey cheese, and smoky sautéed peppers.

For the adults in my life, I still add a piece of sautéed banana pepper on top. You really shouldn't skip it. It's a great appetizer for a party, and my entire family goes wild over them, requesting them often. When I host a family gathering, these little bites are always on the menu.

You might have some leftover sauce and sausage from this recipe. Stuffed hot banana pepper bites are so versatile. Scroll down to see what other meals you can make from the leftovers.

When toasting the bread, I like to coat a sheet pan with olive oil and season the pan with salt and pepper. This may sound weird to you, but this allows you to season both sides of the toasts without having to flip them over.

I like to finish this tomato sauce with a little olive oil. This does two things. First, sometimes tomato sauce can become too thick and viscous. Adding olive oil will thin it out. Secondly, olive oil imparts so much flavor. It might not be obvious, but olive oil is what makes tomato sauce extra tasty.

Remember, you can dial the spiciness up or down, and can achieve this by adding more or less minced hot pepper. You could also forgo the sweet Italian sausage and just have hot Italian sausage or vice versa.

Most of the components for this appetizer can be made ahead of time. You can make the sautéed peppers, the sausage mixture, and the sauce and store them in the fridge. The crostini can be made ahead and stored in a paper bag. Just make sure that they are completely cooled. Otherwise, you will have chewy, soggy crostini. The cheese can be sliced ahead of time too, but I like to buy the pre-sliced log of mozzarella cheese. It just makes life a little easier. 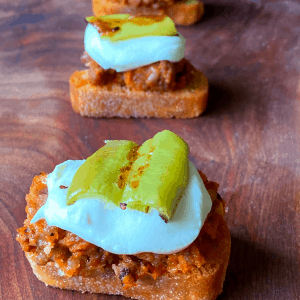